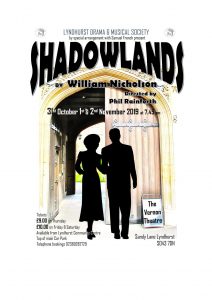 Shadowlands is an intensely personal and moving biographical drama concerning an intriguing episode in the life of C S Lewis. Probably best known as being the writer of the Narnia Chronicles, Lewis was a Professor of English Literature at both Oxford and Cambridge Universities. In the 1952 he met an American poet, Joy Gresham. Although, on the face of it the two were very different individuals, they became close friends and later married each other, twice. The first time to help Mrs Gresham obtain British citizenship and the second when she became very ill with terminal cancer. The play follows their emotional journey and the impact it had on Lewis and those around him.